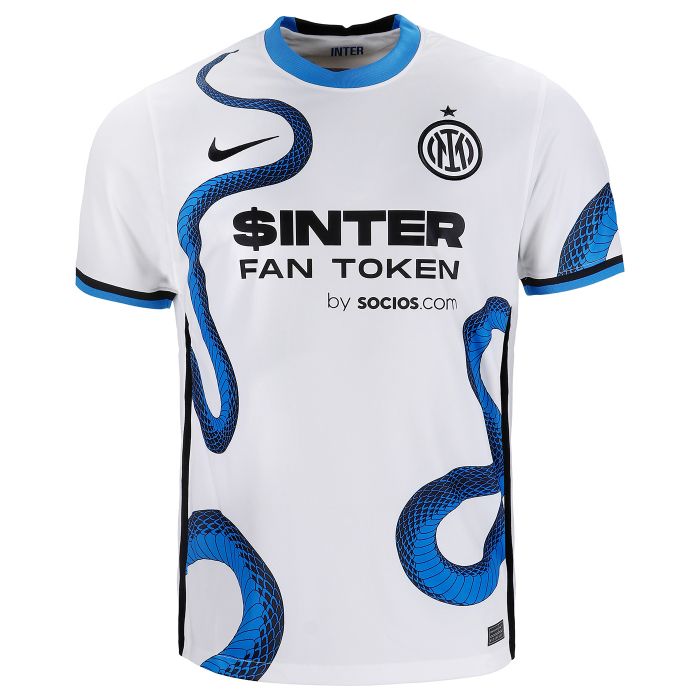 Inter Milan present new away Kit for the 2021-22 Season. The jersey and its snake design were leaked a few days ago. But the Nerazzurri have now officially presented it. You can have a look at the new away jersey here as Inter have shared a video revealing the shirt. Inter are continuing with the white theme for their away kits and have a snake running through the shirt from front to back in this one. The kit also has white shorts and socks. It has blue and black finishes on the sleeves and the socks and only a blue finish on the round neck.

The jersey has the new logo. Inter revealed their new logo a few months ago and it had mixed reactions from the fans. Some fans were sad because they ditched their classic logo and created a basic modern one. While some fans are happy with it as it looks more clean and fresh. Inter Milan also have a new sponsor this time as they have parted ways with Pirelli after 27 years. Many Nerazzurri fans are sad as they had lots of memories printed in their mind with Pirelli. Inter Milan now have signed with an American technology company Socios.com. You can see “$ Inter Fan Token by Socios.com” on the chest. The Nerazzurri also have partnered with Lenovo which will be printed at the back.

Inter have made a statement saying that it is the new skin of an icon in Milan. Nike have designed the jersey perfectly. The new away jersey is in continuity with the home kit as they have kept the theme of the Biscione that changes skin. Thus Biscione is a type of snake and it holds a historical symbol in the city.

Also, You can buy the new jersey from Inter’s site.