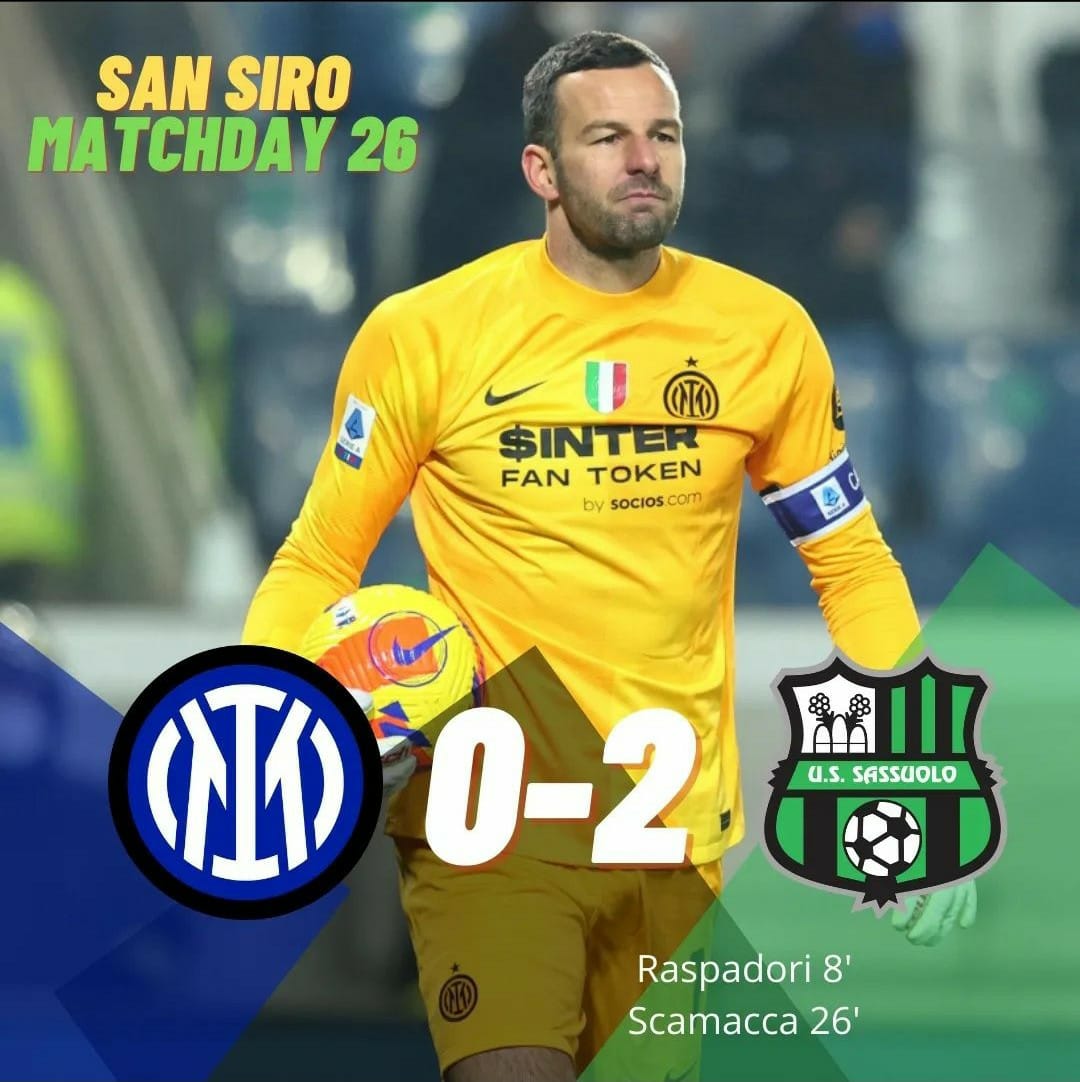 Inter suffer shock defeat against Sassuolo. The Nerazzurri had the chance to climb back to the top spot in the Serie A table. AC Milan dropped points against Salernitana but, Inter could not take advantage of that as they lost 2-0 to the Neroverdi. The game was highly entertaining as Inter had plenty of chances, but they were not clinical enough.

Simone Inzaghi decided to start Sanchez, and he had to play Gagliardini as Brozovic was serving his suspension. Sassuolo took advantage of that as Inter do not have a proper replacement for Brozovic. Hence, Sassuolo created plenty of chances in transition and scored their first goal on the break. Lopez got the ball off Calhanoglu and found Berardi, who provided a perfect pass to Raspadori. The 22-year old fired a low shot between the legs of Handanovic and gave Sassuolo the lead.

Inter then started to create some chances as Calhanoglu’s shot just went wide in the 16th minute. However, Sassuolo doubled their lead in the 26th minute, as Traore crossed the ball and found Scamacca, who was completely unmarked. Perisic thought that the Italian forward was offside, so he did not mark him, and Inter paid the price for it.

Inter suffer a shock 2-0 defeat at the San Siro

Simone Inzaghi decided to substitute Darmian and Gagliardini after the break, and he brought Dumfries and Dzeko. Inter started the half brilliantly, and Dzeko had a chance to reduce the deficit. Dumfries provided a ball to the Bosnian, but he could not place his shot as he went off balance. Both Dzeko and Lautaro missed plenty of chances, which left Inter with no points.

Consigli had a brilliant game as he made diving saves. Inter would have finished those chances on another day easily. In the 72nd minute, Lautaro had a clear chance to find the net as Consigli was down after saving Dzeko’s effort. But, the Argentine could not keep his shot on target from a few yards out.

Sassuolo were still a threat on the counter as Traore made several runs forward, but they could not extend their lead. Inzaghi made more substitutions, but Inter could not find a breakthrough. De Vrij’s headed goal from Vidal’s cross got disallowed in the injury time. The ball touched Skriniar’s hand during the build-up for the goal, and Inter suffered a bitter defeat at home.