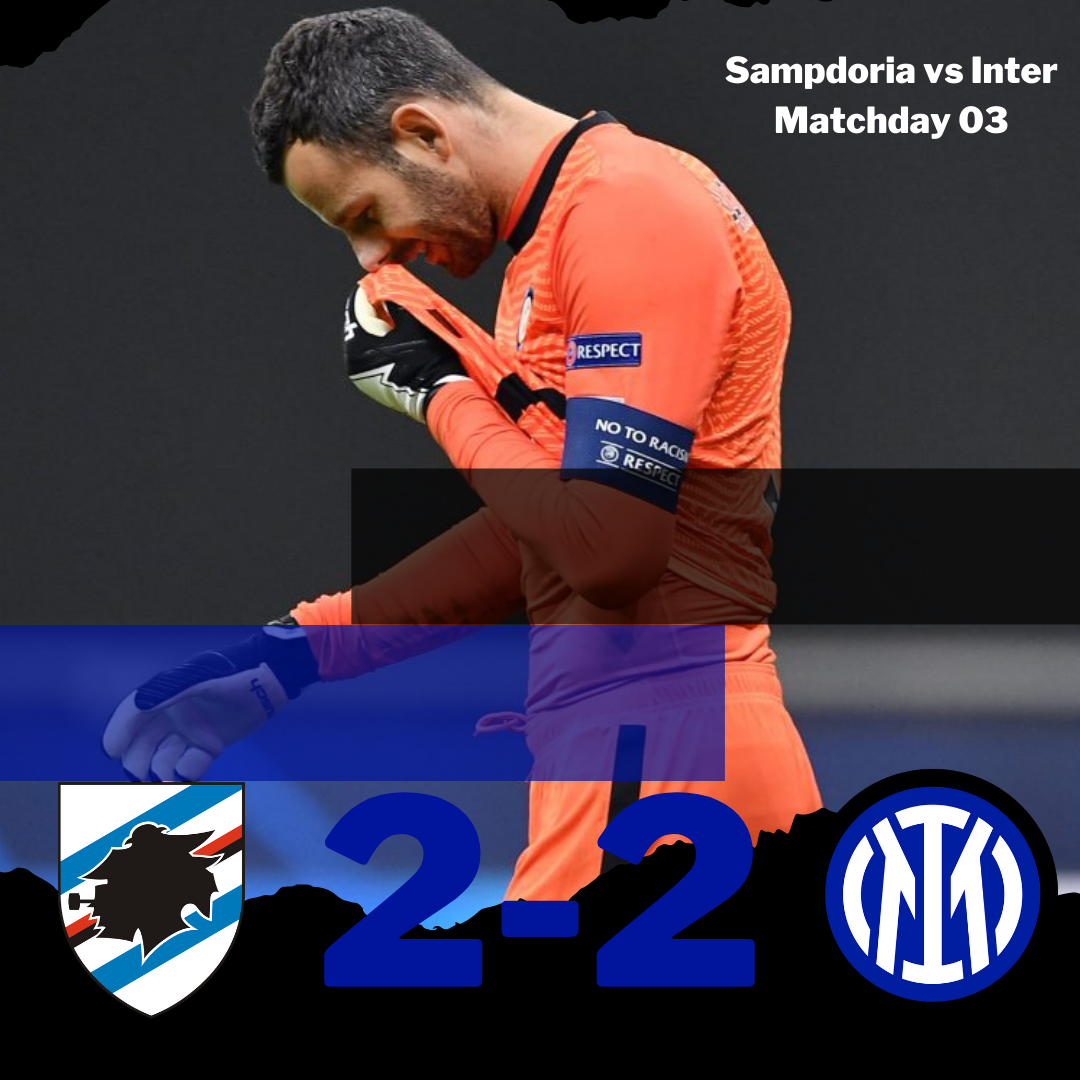 Inter’s winning run has come to a screeching halt as Sampdoria hold Inter 2-2. The Nerazzurri were rusty and probably out of place from the first minute. Inter Captain Handanovic started between the sticks with de Vrij, Skriniar and Dimarco as the back three. Bastoni’s injury kept him out of contention and he might even miss the opening game of the Champions League. Darmian and Perisic got the nod on the right and left wing-back roles respectively. Barella, Brozovic and Calhanoglu made up the midfield with Dzeko and Lautaro upfront.

Inter’s problem came down to player fatigue as Lautaro, Perisic, Vidal and a number of other players have not got enough rest. This left the Nerazzurri rusty and out of option at times. Despite the problems, Inter went 1-0 up through a Dimarco freekick which was an excellent way to bring up his debut goal. Soon, Sampdoria equalised through a Dzeko deflection that left Handanovic on his wrong foot. An excellent run by Barella and an equally top class finish by Lautaro got Inter 2-1 up before the end of the first half.

The second half saw Sampdoria pull back parity with a stunning goal that left Handanovic stuck on his feet. A slew of substitutions by Inzaghi followed, but Inter never looked defensively solid at any point in the second half. Individual brilliance kept Inter from conceding another goal. Correa came on for Lautaro after the 60-minute marks and made an impact instantly, coming close to scoring twice. But the party came to a halt when Sensi picked up an injury, he did carry on playing but without making an impact, eventually going off the field with 10 minutes to go. This left Inter hamstrung as they were not able to create attacks with fluency anymore.

Inter will not be upset with the result looking at the squad that was available and Sensi going off. But, with other title contenders picking points, Inter are on the backfoot. Not to forget, the season has just begun and being solid throughout is more important than going full throttle in the beginning.

Inzaghi’s men failed to silence Sampdoria on the right-wing. With Perisic looking seemingly tired, there’s little you can blame him for. Inter play Real Madrid next in their Champions League opener and Bastoni is likely to miss that one too. Will Inzaghi trust one of the old guards in D’Ambrosio, Rannocchia or Kolarov or continue with a struggling Dimarco?