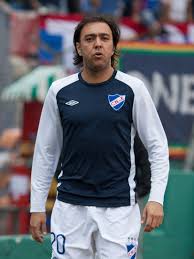 Tribute to Inter legend Recoba who celebrates his 45th birthday today. The legend might not fit into the set standards but his career was nothing short of extraordinary performances. The fact that football was a hype back in the 1990s and early 2000s is not unknown. In fact, it was a resurgence of football and it seemed as if the players only played to entertain their fans. It was an era that saw a number of legends leaving footprints behind. And Recoba is one such legend who played for Inter but in the most unconventional ways.

Recoba never did what a normal person would do. He was a left-footed footballer and undoubtedly, it was nothing less than a magic wand. The ball would stick to his feet and his goal had so much power that it would uproot the goal post itself. The only drawback one could find in him was his lazy attitude towards the game. However, that only added to his charm.

Tribute to Inter Legend Recoba who was unlike the ordinary

Recoba made a move to Inter in 1997, the same Summer when R9 Ronaldo came to Inter. On his debut, Recoba made an impact that no one expected. Everyone thought he’d need time to adjust as his move to Inter was a huge one. However, Ronaldo failed to make the impact that was expected of him. On the other hand, Recoba who was on the bench for a while came in the final 18 minutes of the game against Brescia and changed everything.

While he may have left football, not in the most heroic way, he is different from anyone else and he is a very important figure in the history of football. And the Nerazzurri celebrate his birthday with the unforgettable memories he has given to the club. Furthermore, recently Ronaldo praised Hakimi and the club’s collective efforts towards the Serie A title. Inter are leading by 10 points in Serie A.