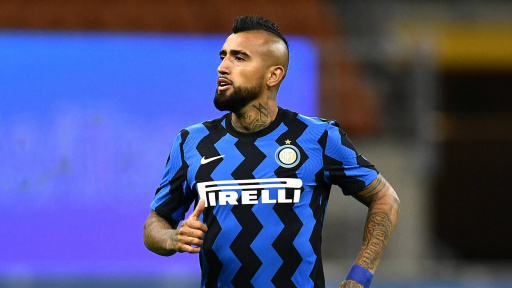 Vidal was greeted by Flamengo fans at the airport as the Chilean will soon move to the Brazilian club. The Chilean has always wanted to move to Flamengo and is now close to joining them. However, the deal is still in negotiation as Vidal said to a journalist in Brazil. The veteran midfielder has agreed to the personal terms with the club but the switch to Flamengo will take some time.

Inter have been working to offload both Chilean teammates as they want to free the wage bill and make move for Dybala. Inter will not go for the Argentine until they sell Sanchez and one more forward. They have also signed a couple of midfielders in the transfer window so the sale of Vidal is only a matter of time. The wage bill reduce and Inter will be able to make room for other players they have signed.

Arturo Vidal greeted by Flamengo fans at the airport

The Chilean had some offers from big clubs across Europe but he only had Flamengo in his mind. The veteran midfielder feels that he still has the potential to play at a top club. He recently said that Flamengo are the best club in South America and he would love to play for them. Vidal has agreed to an 18-month contract with the club and will have a meeting with the club soon.

Inzaghi did not use Vidal regularly but the Chilean made impactful appearances from the bench. He does not have the energy to play the full game but he can still help a team from the bench. The 35-year-old is a serial winner and has loads of experience. He has won many league titles so far in his career with Juve, Bayern, Barca, and Inter. Now he wants to win trophies with Flamengo and compete in Copa Libertadores.