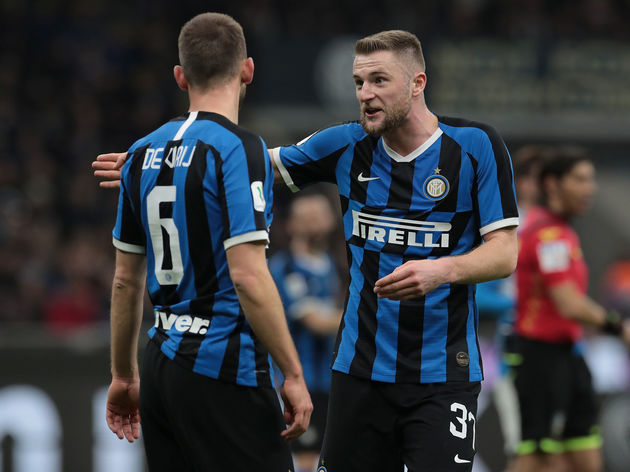 You can’t get past Skriniar says Stefan de Vrij. Both of them play with the Italian giants, Inter Milan. The trio, Skriniar, Bastoni, and de Vrij played a very important role in Inter’s Serie A win. In fact, the Nerazzurri had the best defense in the 2020-21 Serie A season. Skriniar started his professional career in football with Sampdoria. He signed a four-and-a-half-year contract with them in 2016. However, he joined Inter Milan in 2017 on a five-year contract.

The Italian giants paid a reported fee of €20 million that also included striker Gianluca Caprari. In fact, Skriniar became the most expensive Slovak player of all time. Further, Skriniar almost completed a move to the Spurs. However, Conte stopped the transfer in the winter transfer window in 2020. Ironically, it was a fallout between Conte and Skriniar that led to the decision of a transfer in the first place. Although Conte realized that he can use Skirinar in his system effectively. Thus, the defenders ended up playing a very important role in Conte’s plan for the Scudetto. He recently scored against Poland to get 3 points for his team.

You can’t get past Skriniar, says De Vrij, shares details of their relationship

The trio was great on the field for the club. Furthermore, de Vrij said that he is not as good as his teammate Milan Skriniar. He stated that Milan has been a rock this year and has improved a lot over time. He added that they both share a good relationship on and off the field and discuss a lot while playing. De Vrij talked highly of his fellow teammate and said that he is very strong and nobody can get through him in a one on one situation.

Inter are looking to make €80 million out of player sales this summer and are still unsure who to sell. However, Hakimi might be the big player that Inter would be letting go of. Skriniar will probably stay at Inter for the next season.