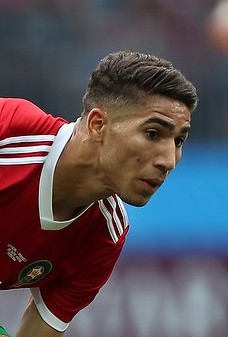 Arsenal eye Archaf Hakimi after Inter decides to sell him in the summer window. Hakimi has been nothing less than a spectacular player with his performances for Inter. The Moroccan is an extremely versatile player. He plays as a full back for Inter, mainly right-back. However, he can also play on the left and as a winger. Hakimi joined Inter in July 2020 on a reported fee of around €40 million. However, Inter failed to make the first payment of transfer €10 million.

Hakimi started playing football as a youth icon for Real Madrid at the age of eight. He made his senior debut in October 2017 in a 2-0 win over RCD Espanyol. He scored his first La Liga goal in December 2017 in a 5-0 win against Sevilla. Hakimi was attributed as the first Moroccan player to win the Champions League. Madrid had won their 3rd consecutive title in the 2017-18 UEFA Champions League. He went to Borussia Dortmund on loan before joining Inter. Hakimi is playing a crucial role for Inter at the moment and his move elsewhere is questionable.

Inter are short of cash and are struggling with finances after the Coronavirus pandemic. The club haven’t been able to pay the player’s wages on time. On top of that, the Nerazzurri are looking for new investors for a while. While their current investors, Suning were in talks with BC Partners, the negotiations have ended. In fact, due to the same, the San Siro project has been delayed until Inter’s long-term future is known.

Arsenal have their eyes on Hakimi for a while. They tried to make a move in the summer but were put off by the price. In fact, they also wished to hold onto Hector Bellerin who’d cost around €40 million this summer. Hakimi is 22 and has gained tons of experience already. There is no doubt about the fact that it would an extraordinary signing for Arsenal and is worth the €40 million. But will Hakimi make the move while he is enjoying his time at the San Siro?