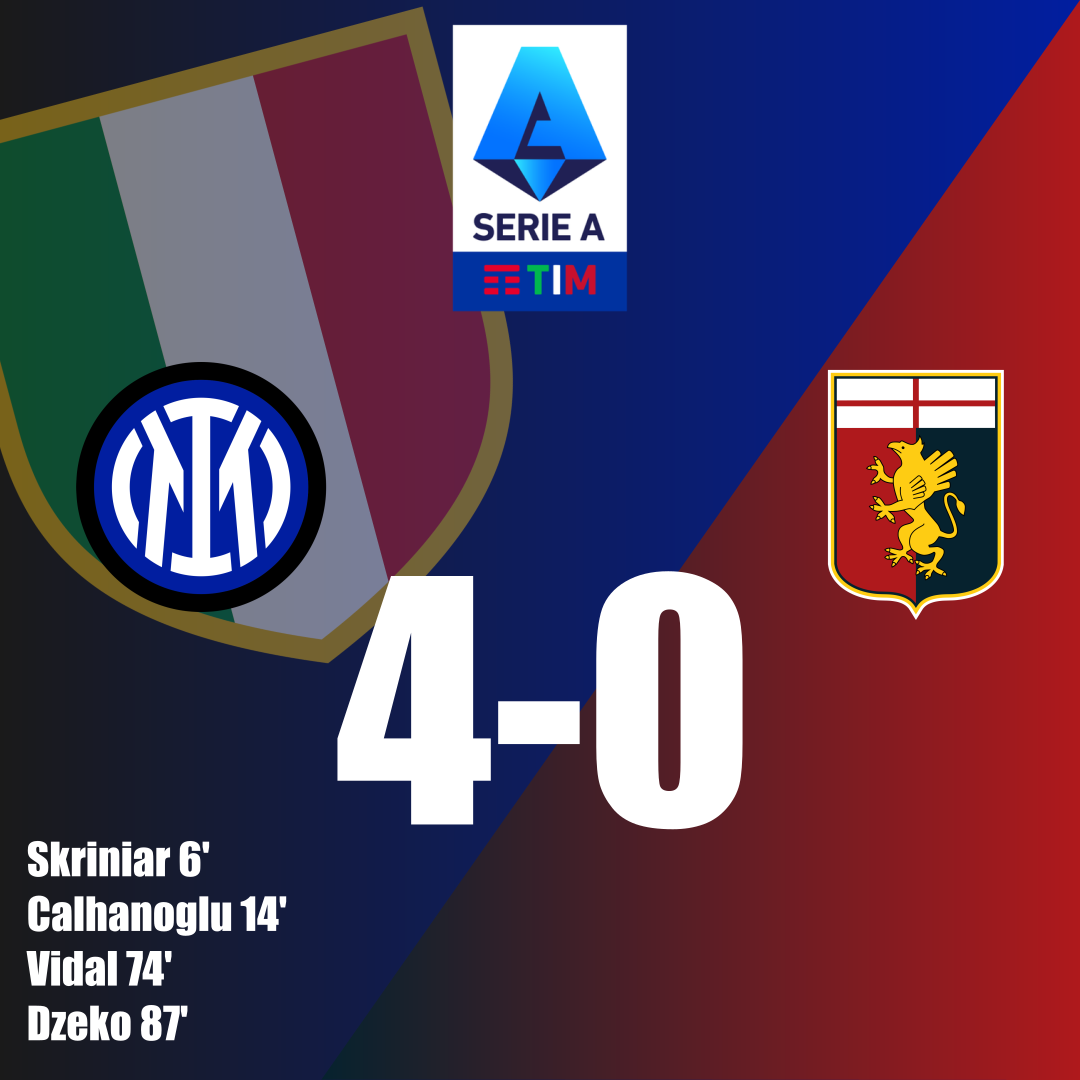 The Nerazzurri start their season in style and silence the critics after a troublesome transfer outing. Inter thrash Genoa 4-0 in a dominant display of power. Simone Inzaghi’s first game as Inter manager will be remembered for a while. Taking on Genoa, Inzaghi had to do without Lautaro and Sanchez and move away from his conventional system. The former Lazio man went with a 3-5-1-1 system which was also on display in pre-season. Against Dynamo Kiev in a pre-season friendly, Inzaghi put the system in use.

Handanovic was the man in goal and the trio of Bastoni, Skriniar and de Vrij made up the back three. Darmian and Perisic took the right and left wing-back spots respectively. Barella, Calhanoglu and Brozovic made up the midfield with Sensi playing behind Dzeko up-front.

Despite losing three important pieces of the Scudetto winning puzzle, Inter haven’t lost the will. And that was on display when Skriniar put the Nerazzurri ahead with a header through a Calhanoglu corner. Then came Calhanoglu’s debut Inter goal in the 14th minute. In the dying minutes of the first half, Inter did lose the omentum and gave Genoa a golden chance that went begging.

Inter fans have been through hell this summer after winning the Scudetto. Our talisman Lukaku left along with Hakimi who became a casualty of our finances. This thrashing of Genoa is a big statement to the critics of the club. Inter might have lost the most crucial pieces to its puzzle but Simone Inzaghi has what it takes to script his own legacy. When Inter came back to take on a Genoa side that was in the mood to take things over in the second half, they did things right. The Pazza Inter attitude is something Antonio Conte struggled with and to some extent improved last season. Under Inzaghi on the opening day, Inter were not losing their calm even for once.

Dimarco and Vidal came on for Perisic and Sensi respectively in the 68th minute. Dimarco is someone who can be starting games in the left wing-back position sometime in this season. And he did show his class when on and off the ball. This young lad is an upgrade on Ashley Young and ageing but classic Perisic.

Vidal is not someone who did anything phenomenal last season. He was often playing outside his natural position and was very ineffective. Inzaghi put him behind Dzeko and it just looked like an orchestra doing a perfect job from there. Vidal did a perfect job and got on the scoresheet in the 74th minute with the help of a brilliant Barella assist. Dzeko finally got his debut goal after a close miss in the first half. His 87th minute header did the job for Inter and put a smile on the Nerazzurri faces.

With the absence of Lukaku and Hakimi, Inter lost half of their goal-scoring options. But, this has made the side a lot more flexible on the field. The fact that the rest of the side is still the Champions of Italy is being overlooked by many at the moment. But this is adding to Inter’s advantage who are not under the burden to win the Scudetto but they are the most serious contenders.

Simone Inzaghi is on the Inter bench because he plays a system similar to Antonio Conte. And the Inter management didn’t want to make a lot of changes to the system so Inzaghi got the job very easily. But this is no reason to underestimate the former Lazio manager. Unlike Conte, Inzaghi is extremely flexible with his system and lets players do their thing. Under him, it will only be a matter of time to see the likes of Dimarco, Satriano and other young guns flourish. Calhanoglu, Vidal, Barella and the rest of the midfield contributed their heart out to the attacking unit in the game, something that wasn’t a common sight under Conte.

Calhanoglu fits Inter’s system well and has the ability to weave magic. His contributions to Dzeko and two fantastic finishes one of which was ruled out prove that he can contribute on a massive level. As Inter thrash Genoa 4-0, they look solid to repeat a title triumph and go deep into the Champions League this season.