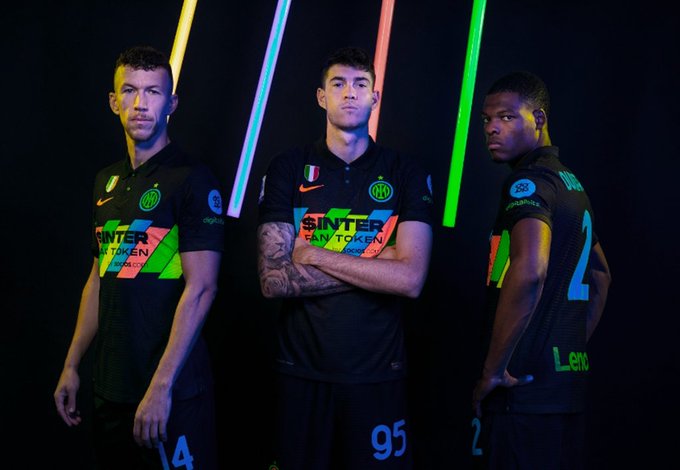 Inter Milan unveil their new third kit for this season. After unique home and away kits, Inter opted for a plain but classy 3rd kit. This kit depicts the values of equality and inclusion, which is a part of Inter’s identity since they were first founded. You can have a look at the third kit for this 21/22 season here on Inter Milan’s official site. The black kit has a motif with four bright color stripes in diagonal lines which shows acceptance of diversity and eliminates all discrimination. The multi color stripes union was also the idea behind today’s hero video. The video and link are available in all of Inter’s digital channels today. It shows the differences diminishing as fans from all over the world come together through the club.

The Nerazzurri’s founding principle can be seen in the jersey with the words, “Brothers and Sisters of the world”. The jersey that Inter’s players will wear and the ones that fans will get are made of around 95% recycled plastic bottles. So, it is a revolutionary kit that looks good with a production philosophy. And it also aims to reduce the impact on our environment.

The new Inter logo with a black background looks clean. After the release of the new logo, the fans had a mixed reaction. The purpose of this new logo and unique kits is to reach a wider audience. Inter have also partnered with Zytara and Digital Bits which will attract the new tech savvy generation. And with the values represented in this new kit, the club remains true to its roots.

The new Nike 2021/22 third kit is available at store.inter.it, nike.com and in the official Inter Milan store at Galleria Passarella. It will also be on sale at all authorized sale outlets from September 17.