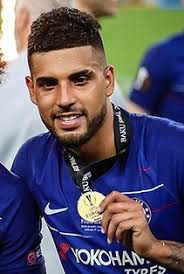 Tuttosport’s print edition said Inter want Emerson Palmieri. As Conte and the Nerazzurri’s directors seek a player similar to Hakimi on the opposite flank this summer. He is out of contract with Chelsea next summer (2022). He has not featured much this season, making just 14 appearances in all competitions.

Chelsea are likely to sell Emerson at the end of this season for a fee in the range of €12-15 million. Inter could be a leading contender to bring Emerson back to Serie A. But he is not the only player they are looking for in the left wing-back position. Atalanta’s Gosens will be very difficult to sign, given the German’s €40 million price tag. But Filip at Frankfurt could be a more viable option. Inter are also watching two younger options, namely Vitaliy at Dynamo Kiev and Noah at FC Koln.

Inter want Emerson Palmieri, but they are also looking for other options

One of the modern wing-back requirements is the ability to start attacks down the wings with minimal team support. With teams playing expansive football, having wing-backs who do not support the attack puts the team at a liability. Because then the team’s attack is forced to repeatedly develop on the opposite side or through a certain action. Emerson fulfills that exact requirement. For Chelsea and Italy, Emerson is able to start attacking plays on the wing with often one nearby midfielder or a winger. This not only makes Emerson a versatile player but also adds attacking value to the team.

The most common example of Emerson’s creativity is use of his teammates. Emerson engages in intricate play with his teammates. He then goes to wide and fades out of the focus of the action. From here, he hopes that one of his teammates spots the space he is in and passes to him.