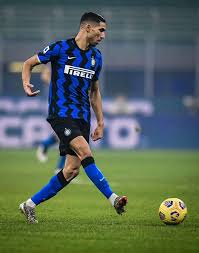 Arsenal want Hakimi as R9 Ronaldo praises the Inter full-back. R9 Ronaldo is currently a businessman and the President of the La Liga club Real Valladolid. However, he is also a retired football professional who played as a striker in his days. He is one of the greatest players of all time and generations look up to him. In fact, in Portuguese, he is called O Fenômeno i.e. The Phenomenon. Furthermore, he has won FIFA World Player of the Year three times and also has two Ballon d’Or awards in his name.

The Brazilian footballer has praised Hakimi saying that he can only imagine playing with Hakimi. He says, “Hakimi is an extraordinary talent and Real Madrid made a mistake by letting him go.” Ronaldo broke several records before he went on a three-year break due to injuries. Further, he joined Real Madrid in 2002 and won the 2002-03 La Liga title. However, he played for AC Milan and Corinthians before he retired in 2011.

Arsenal want Hakimi but is it really possible?

Hakimi joined Inter in January 2020 on a reported fee of €40 million. He provided an assist in a 4-3 win against Fiorentina in his debut match for the club. The Moroccan has had an extraordinary year at the San Siro. He has made 33 appearances, scoring 6 goals and providing 6 assists across all competitions for the club. In fact, he has established himself as one of the most effective full-backs in world football. And there is no doubt about the fact that the Spanish giants will be rethinking their decision of letting him go.

Conte brought Hakimi to Inter as he liked his style of play. While the Moroccan found it slightly difficult to settle into Conte’s 3-5-2 system, he has adapted well. And now that he has polished himself, his value has increased. The Gunners are interested in him but there is hardly any chance of Inter selling their star. On the contrary, even if the Nerazzurri decide to sell him, the price tag will have a whopping figure. And it is almost confirmed that Arsenal won’t be able to afford him.