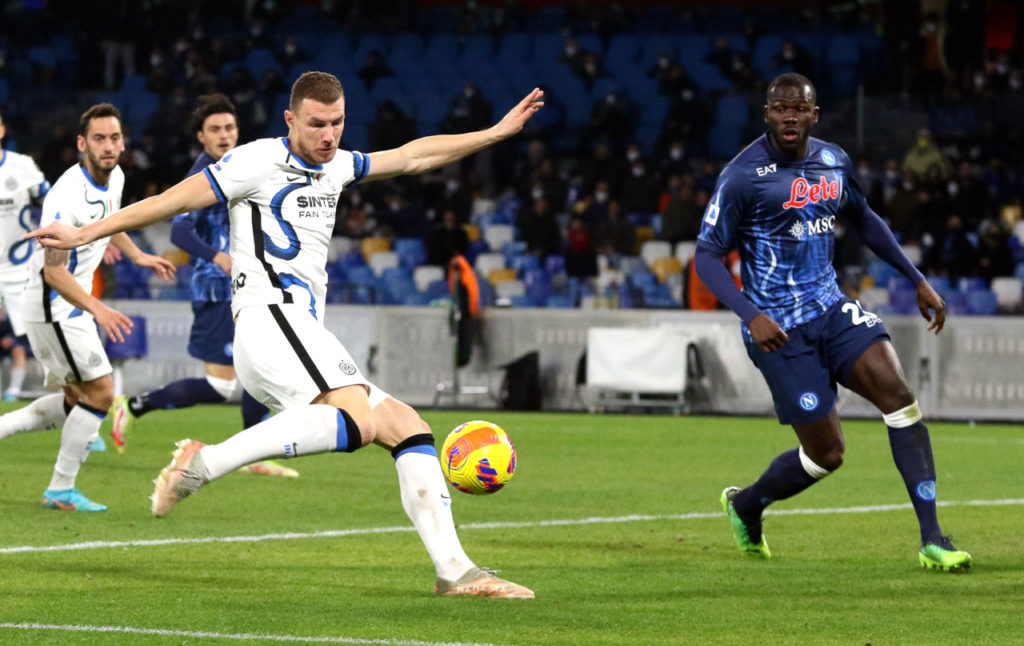 Edin Dzeko rescues a point for Inter Milan and denies Napoli the top spot. Inter dropped points against Napoli yesterday night. The draw has helped AC Milan as they now have a chance to go on top if they beat Sampdoria today. Inter had to play without Simone Inzaghi on the touchline. The Italian manager was serving a suspension after the AC Milan match.

Napoli were looking to press high at the start of the game and, Di Lorenzo got a chance with a long-range strike. Napoli got a penalty in the 6th minute as Stefan De Vrij’s poor form continued. The Dutch defender brought Osimhen down in the penalty box while clearing. The referee awarded the penalty after VAR intervention. Insigne, Napoli’s captain stepped up to take the penalty and gave Handanovic no chance. The Italian winger had a great game as he created most chances in the match (3). Inter had a chance in the 38th minute when Perisic provided a cross to Dzeko. But, the Bosnian striker could not place his header.

Dzeko rescues Inter as the Nerazzurri hold their top spot

Inter managed to equalize early in the 2nd half through Edin Dzeko. Lautaro managed to provide a cross from close to the byline in the box. Dzeko jumped up to head the ball as it hit Di Lorenzo. So, the ball bounced back from the defender to Dzeko and, he managed to thump it in to give Inter the equalizer.

Napoli had another brilliant chance with Elmas as De Vrij could not clear properly and, the ball went to Elmas. The midfielder only had Inter’s captain to beat from close range but Handanovic managed to keep the shot out for a corner. Inter were now keeping more possession of the ball as they tried to slow the tempo of the game. Dimarco had a brilliant game as he was playing for Bastoni who has an ankle injury. The Italian defender completed the most number of passes in the match also, he created chances by moving forward. Inter made some changes in the last ten minutes but, they could not get a lead and had to settle for a point.