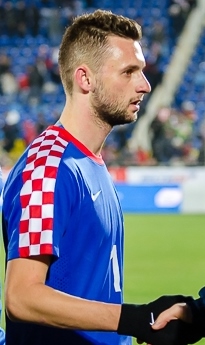 Marcelo Brozovic might not stay at Inter as they can sell him if a good offer arrives. He has been a vital player for Inter. Also, he helped them a lot in their Serie A victory after 11 years. He has been a regular starter under Conte. But, the financial problems might force Inter to let him go if a good deal comes. His current contract expires in 2022 and Inter have not given him a new one yet.

Brozovic played 39 games this season and was consistent. Beppe Bergomi told that he played a important role in Inter’s Scudetto victory. But, Inter are going to have a tough transfer window due to their financial problems. As reported by Gazzetta Dello Sport‘s print edition. So, the Inter board will have to decide who they want to keep and who they want to sell in the window. Also, they will have to find a way to raise funds and might have to reduce the wage bill.

Ashley Young and Kolarov are almost set to leave the club this summer. As their contract are going to expire at the end of this season and the board has not given them another one. While Ranocchia is still thinking about the contract renewal. Sanchez and Vidal might also leave, however, the former has proven that he can be a quality backup. Also, Sanchez does not want to leave Inter yet. But they both have high wages and might have to take a cut anyway. Radu and Pinamonti might leave too to get more playing time elsewhere.

Inter will have to be very careful on whom they want to sign because of the shortage of funds. The board and Conte should be in sync over this matter.