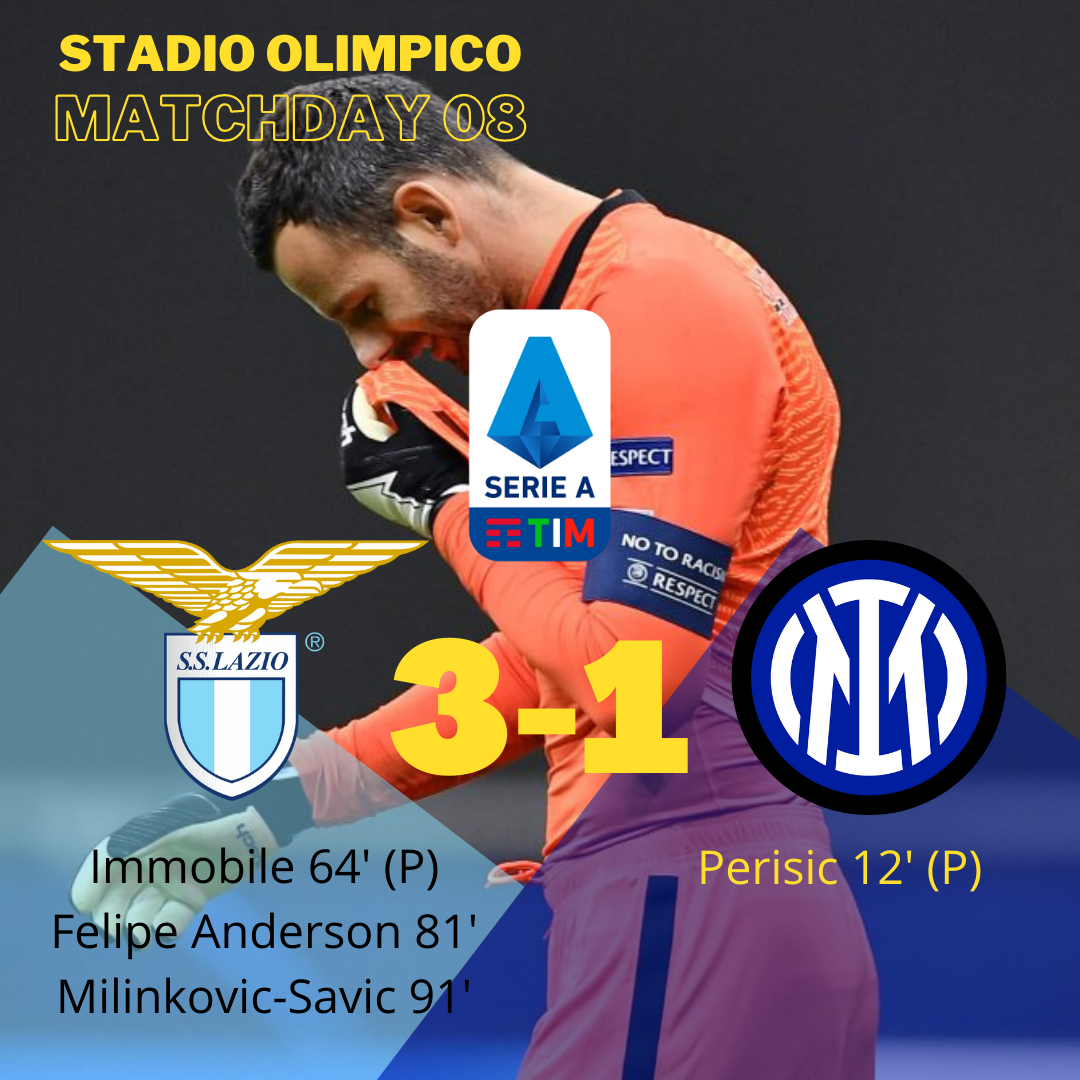 Inter Milan suffer their first league defeat of the 21/22 season. Inzaghi could not defeat his former club and Inter lost 3-1 to Lazio. The Nerazzurri are now 5 points behind the top spot as AC Milan won their match against Hellas Verona. Inzaghi decided to give rest to some of his key players for the UCL game next week. Also, Lautaro and Correa came back to Milan last night after their international duty, so Inzaghi decided to bench them. So, Perisic started upfront along with Dzeko. Lazio came back after Perisic’s penalty and the game heated after Anderson’s goal. Inter were furious as Dimarco was down injured during the build up of the goal and this lead to some controversy.

Inter started the game well as Dzeko got a chance in the opening minutes from Barella’s cross but he could not keep it down. In the 12th minute, Inter go a penalty as Hysaj got Barella down from behind in the box. Perisic converted the penalty with ease as he sent Pepe Reina to the wrong side. The hosts then took control of the game and Inter were trying to stay compact. Anderson went forward from the right flank and gave the ball to Basic who could not beat Handanovic. Then, Perisic stuck a powerful shot but Pepe Reina managed to save it.

Inter suffer first league defeat due to a controversial goal

In the second half, Inter were much more compact and gave Lazio a few chances. But in the 64th minute, after a corner, Lazio got a penalty as Bastoni got booked for handball. Immobile converted his penalty and levelled the score. Inzaghi made some changes and Inter looked better in attack. But in the 80th minute, Dimarco got down after running into a Lazio player. The game continued after Pepe saved Lautaro’s shot and Lazio went on counter. Inter were practically playing with 10 men. Immobile could not beat Handanovic but the ball went to Anderson who finished it to give Lazio the lead. Lautaro and Dumfries were angry and got yellow cards for their reaction after the goal.

Lazio scored another as Inter could not defend well in set-piece and Milinkovic Savic scored the third goal after a great delivery from Albero. Luiz Felipe got the red card as he was joking with Correa, his former teammate after the goal. Inter will be frustrated from this result but they now have to focus on their next match as they face FC Sheriff.