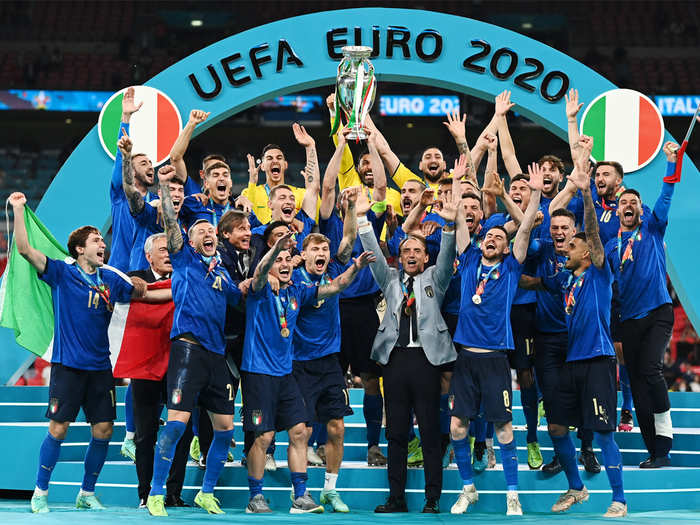 Italy wins UEFA Euro 2020 as they beat the Three Lions in penalty shootout. The Azzurri were not able to qualify for the 2018 FIFA World Cup, but now they have completed their comeback in style by lifting the Euro 2020 trophy. Gianluigi Donnarumma was their hero last night as he saved two penalties for them after a 1-1 draw at the Wembley Stadium. Also, he got the Player of the Tournament award.

England were off to a dream start when they scored the quickest goal at a European Championships final. Harry Kane dropped deep and gave a long pass to Trippier who had space in front of him. Trippier then crossed the ball perfectly to Luke Shaw who finished it brilliantly. After the opening goal, Italy settled into the game and started having more possession of the ball. But they could not create any clear chances in the first half.

The Azzurri made few changes in the second half and played more efficiently. They brought Berardi and Cristante in for Immobile and Barella. Now they played with no definite striker which gave some problems to the English defense Insigne had more freedom to move in the center and started creating chances. Italy played in England’s half for most of the game and their relentless pressure finally paid off when Leonardo Bonucci latched to Verratti’s header to equalize. Italy had some more chances as the game went on but they could not find the breakthrough.

In the penalties, England converted their first two as Harry Kane and Harry Maguire gave no chance to Gianluigi Donnarumma. For Italy, Berardi scored the first penalty but Belotti could not convert his. After that, Rashford missed his penalty and Donnarumma was able to save both Sancho and Saka’s spot kicks. While Bernardeschi and Bonucci converted their chances and Italy won the penalties with 3-2. Both Barella and Bastoni would be confident for the upcoming season after this win.