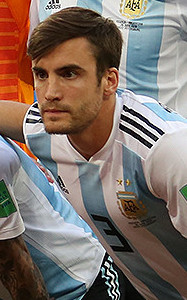 Tagliafico to Inter can be a possibility in the coming January transfer window. The Argentine footballer is on the list of many clubs since last summer. In fact, Inter were keen on bringing him to the club last summer. However, Ajax’s €25million demand put off the deal. Had Bayern Munich signed Ivan Perisic, Tagliafico would’ve got the chance to come to Inter.

Apart from Inter, Chelsea also showed an interest in the Argentine. Chelsea were in the process to convince Leicester City to let go of Ben Chilwell. Tagliafico was their backup for Chilwell, the Blues could’ve let go of Marco Alonso, another player that Inter had eyes on. Nicolas failed to materialize a move to either of Inter and Chelsea in the summer.

Tagliafico will be an appropriate replacement for ageing Ashley Young. Also, the quick and versatile left-back can thrive under Antonio Conte’s inverted wing-back system. Subsequently, Inter will have more effective counters with Hakimi and Tagliafico on the two flanks.

Tagliafico to Inter amidst the club demands

The Ajax left-back is one of the best left-backs in Europe right now. The likes of City and Leicester have their eyes on the Argentine footballer for the upcoming January window.

While Tagliafico signed the renewed contract with Ajax, the Argentine player asked his side to let him go when a suitable deal comes his way in an informal deal. In fact, Ajax wanted £23million in the summer of last year. However, they are ready to lower their demand to help Tagliafico achieve his dream of playing in a big league. Nicholas Tagliafico’s agent Ricardo Schlieper has revealed that his client can leave Ajax in January. In an interview with FCInterNews, Ricardo revealed that Inter are definitely on the list for Tagliafico. Since they’re aiming to be a part of the best European clubs, Inter are on their list. Although there is no confirmation as of now, there’s a strong chance of a Tagliafico to Inter move in the upcoming season.